Good morning, get me being organised.  It could all go horribly wrong!  Watch this space.
Why the title today?
As a child I did a lot of dancing and singing, although if you asked me to now, watch out, very scary.
Lets just say it ain't like riding a bike!
Who would have have thought I'd had all that training?!
I always wanted to be a dancer when I grew up but at 17 I went for an interview to work on a cruise ship and was a month to young!
I was told to come back when I was older and well, I then got a job and a boyfriend and didn't bother.
A good job too as I think most of the girls that got the job came back with a bun in the oven after the first season.  Fate obviously stepped in.
So what has that to do with the Emerald city?
Stick with me, there is a link, albeit a slightly bizarre one.
One of the shows that I was involved in was the Wizard of Oz at the local technical college for performing arts.  I was part of the Lullaby league, basically a munchkin who welcomed Dorothy to Oz.  I was only about 9 at the time but I can remember it being great fun plus I had time off school, at that age a billy bonus!  The Emerald context.....well, the Emerald city of course.  I was covered head to toe in a lovey emerald costume!

Now to the link.....I was asked by one of my lovely pals at work to create a couple of Emerald Wedding anniversary cards for her.    I don't think there is the choice in the shops like there is for Golden or Ruby anniversaries.
I picked my two favourite designs just now and gave them an Emerald twist. 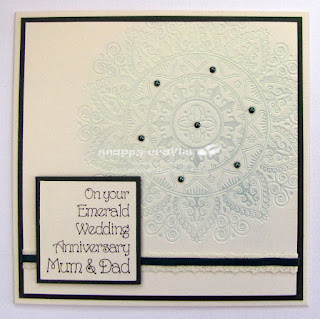 This photograph is not the best sorry, the embossing folder is by Papertrey ink and I have used green Perfect pearls.  Emerald bling, ribbon and lace from my stash and the sentiment was done on the computer.  The card stock is from The Papeterie in Aberdeen. 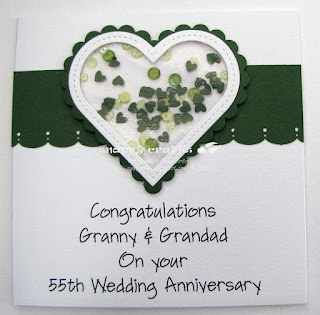 The second card is again using sprinkle dies from Papertrey ink, they are my favourite company for stamps and dies just now.  I have also used a Martha Stewart punch Traditional scallops.

That's all from me today guys, I'm off now to get ready to go into work.  Have a super Tuesday and more from me again tomorrow.  x
Posted by Erika at 08:30

Hello Erika, what stunning cards, glad you mentioned which anniversary Emerald is, hadn't a clue. I'm sure they will be cheished, hugs Kate x

Two fabulous CAS designs Erika, I'm sure the recipients will be chuffed with them. Your emerald outfit story reminds me of being cast as Puck in a Midsummer Nights Dream at school...green tights are never a good look! Carol x

Beautiful, love them both but the 1st one is soooo nice.
hugs Jo x