Good morning all and how are you this Monday morning?
I believe the south of England has ground to a halt with thick fog this morning, well that's not the case here today.  Oh my it is beautiful.  I'm just back from my dog walk along the beach and we walked a little bit further today as it is glorious sunshine, I had to take my coat off it is so warm.
The sky is bright blue and there is not a cloud in the sky.  A stunning morning.

I didn't end up baking on Saturday as I forgot it was the rugby final.  How could I forget that?
It was a good match but I don't think it was the best in the competition.  I had said to hubby at the beginning of the World cup that it would be a New Zealand Australia final, pity I didn't put money on it.  New Zealand outplayed Australia on the day, though I did think in the second half Australia had the opportunity to come back but didn't quite make it.

I failed miserably on Halloween night, I had 30 bags of treats for my youngest boys pals and ran out so had to send Scooby doo to the shops for me.  Yes I did say Scooby doo.
My eldest had his first house party on Saturday night, scary times.  He had a great night.  He had been determined to hire a costume from the local hire place in Forres and came home like this. 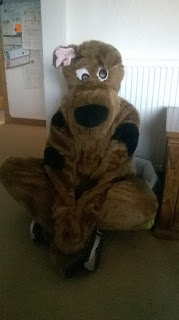 He had a very "jolly" time at the party and can't wait to go out again.  Yikes!
Another hurdle in growing up done and dusted.

On Sunday we went to see the new Bond film Spectre, mmm Daniel Craig, best Bond ever.
The film was good, the action scenes were brilliant, and some of the one liners made me laugh but I have to say there were a couple of slow parts where I found my eyelids drooping!
Although Daniel is a "hotty" I do think Skyfall was a better film overall.  Slightly disappointing in parts.

As for my housework on Friday, I ended up spending the whole day ironing, yes that's how much I had waiting to be done.  I ended up finishing off my chores over the weekend, which wasn't the plan.
I did however manage a little sparkly time.  This is what I came up with. 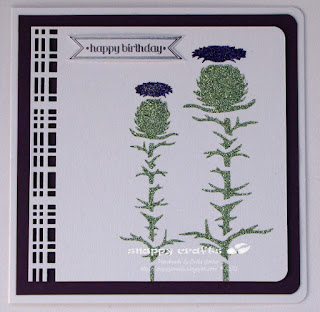 I have used an Imagination crafts stencil, Thistles with Sage green and Amethyst Sparkle medium.
The punch is plaid by EK success and the sentiment stamp and die are by SU.  The dark purple card and glitter doesn't show up as well on this photograph as it does in real live as it is a real deep purple.
And I said I don't do glitter, I think I might get a lot of use out of this Thistle stencil.

That's all from me today, off now to put out my washing and get the hoover out.  I am hoping to do a little baking later as I have some pumpkin puree to use.  I had planned to make a pumpkin cheesecake 'cause I thought it sounded lovely but my lot stuck their noses up so I might have to make muffins instead.  Pumpkin muffins are just yummy.  I better get moving away from this computer, enjoy your Monday.  I am working tomorrow and Wednesday but I will be back at some point to share some more crafty exploits.
Happy crafting,
Posted by Erika at 11:04

Wow, sounds like a full weekend, you will want to go back to work for a rest :)
A lovely card Erika, the sparkle medium has a wonderful finish to it on that thistle stencil.
Hubby and I are off the NEC in Birmingham later this week - he is good, he takes me there twice a year and follows me round the stalls carrying the bags aww. We stay over the night before to save driving there and back in one day otherwise it is too tiring, so looking forward to that. I have some Birthday money which will soon be spent, no doubt three times over :/ there are so many things to look at and demo's to watch, I love it.
Hope the housework passes quickly and crafty time can begin, take care.
Lorraine

Hi Erika, pleased you found the cheque, and I love my poppy.
We were all set for some of the wee ones in our street to knock the door.... we got nobody, I think there must have been Halloween parties going on. Now the fruit Alistair eats. but we are left with som many sweets, which I shouldn't eat and Alistair just chomps his way through them saying that it's got to be a diet next week.

Anyway, gorgeous card, I think I must invest in that stencil, I think it could be used for so many occasions and I love the colours. I love this medium, could do with more shades.

Glorious day here, DH away to the Cairngorms, if only I was fitter, anyway have a good day, Kate x

A gorgeous card Erika, do love the plaid punch...not seen that one before! We only had about 70 callers this year, I was all set for 100! Carol x