Too sunny to care!

Good afternoon all, how the devil are you this Thursday evening?
Hasn't this week gone fast?
The weather up here in the north of Scotland has been beautiful this week, summer has finally arrived.
Did you see that just down the road in Braemar yesterday it was hotter than Barcelona?!
I'm afraid crafting has gone out of the window and I have been outside enjoying the fine rays.
Yesterday after school we took the dog to the beach for a swim, although I think my little one was in getting as wet as the dog.  It was a case of who could get to the ball first regardless of how far it went into the sea!
In the evening, hubby and I decided to pop to the harbour as the sunsets this week have also been fabulous.  I have to say last night was not the best but still pretty special for all of a five minute walk from the house. 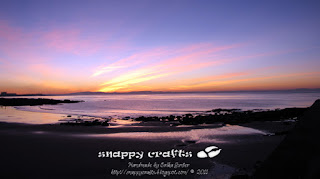 This was taken from the harbour looking out over the west bay towards Burghead.  It surprised me that there were a few folk down there with their cameras.
Slightly later...... 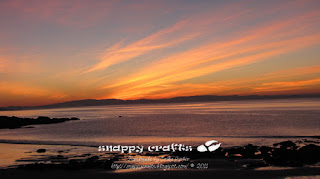 How pretty is nature at it's best?
We had intended on taking a bottle of wine down with us but tea had taken slightly longer than planned.  Such a shame as it was beautiful.

Today hubby and I had a day off together, a very rare occasion.  We decided a trip through to Inverness was on the cards.  We are in need of new carpets and a settee/chairs.
Exciting shopping!
Not as exciting as craft shopping but a new sofa and chairs are ordered to arrive just before Christmas, I just need to decide now on the carpet colour to match.
Hubby said that's the last time he is taking me out for lunch!  (Apparently I am too expensive!)

The crochet is coming on, everything is now suitable stuffed and is just needing stitching up and putting together, not long now and all will be revealed.  It's not a frog or a kangaroo, but it is an animal so you are on the right lines.  Mmmm.

I better go and sort tea as we have a meeting at one of the schools later.
Enjoy the rest of your sunny Thursday, it's oldie time again tomorrow.
That came around very quickly this week.

Evening Erika, I really did think it was a kangaroo!!!!! Sounds like fun on the beach today. We shared our neighbour's puppy today. She had to go to Cornwall to see he elderly mother and her daughter couldn't get round till teatime so we went in to let out little Peggy and had a lovely long play in the garden. I want a Peggy too!

Love your photos every day. We spent a holiday camping with our neighbours years ago and were based in Inverness. Had a great time and I remember one evening having a Barbeque with fish we picked up off the dock when the fishermen came in - oh to be young again ....

I've only been blogging since February this year so will soon be running out of blogged oldies on Friday. Will just "Oldies" be alright when the time comes? And finally while we are talking about WOYWW - one of these days I'm going to show photographic evidence of why I had to have a craft cabin in the garden.

Erika, those photis are fantastic, we were treated to the wonderful sun set the other night coming home from StAndrews. Oh my daughter always says that I am not being asked to go shopping with her again? The first big expensive shop was about 15 years ago we went to look at rugs and she came back having bought a chest of drawers, a coffee table and a unit that the TV sits on, all made out of old reclaimed wood that wasnt cheap. The second time she wanted me to give my opinion on some trousers, she ended up buying her cottage that she lives in, we were talking about cottages and I to,d her about the one in the villiage the girls went to school in. That was it keys were got and she fell in love with it. So she doesn't ask me to go out shopping so much these days. Xxx

Hi Erika,
too right to not to waste your lovely weather with being inside.
Those photos of the sunset are wonderful.
I really can't think of what it is that you have made.
Can't wait to see it.
Lots of crafty love. Jenny L.

What fab photos Erika, the sunsets are stunning.
The other morning I opened the blinds to the most incredible sunrise, the sky was ablaze, I just stood and wondered at nature, in fact I'd forgotten that my reason for being down at that time was to let Teallach in and feed him, he wasn't as enarmoured as I was, Kate x