An apple for my teacher....

Hello there and how are you today?  We've had a mixture of weather this morning, sunshine and showers and I would know this as I've been down to Sports day for my youngest child.
I was asked to help and my job was to give out "well done" stickers to the youngest children who weren't placed in the first 3.  In true mummy mode I wanted to give the kids stickers who weren't at the front of the pack, so to speak and also to those who fell and got hurt too.  The younger ones didn't care where they came as long as they got a sticker....the older ones were a little more competitive.  My eldest child has always been the more sporty out of my two and I always feel for those that don't do well.  I know life is like that and the sooner they learn the better but there is nothing wrong with giving a wee boost now and again.
It's all about the taking part!  ;)

Remember yesterday I mentioned that I have been playing with a crochet pattern?
Every year I like to make a wee something for the kids teachers to say thank you for their work during the year.  Over the years I've made all sorts, candles, picture frames, scrapbooks, jewellery etc...  This year I have decided to embrace my crocheting and have been playing with this idea. 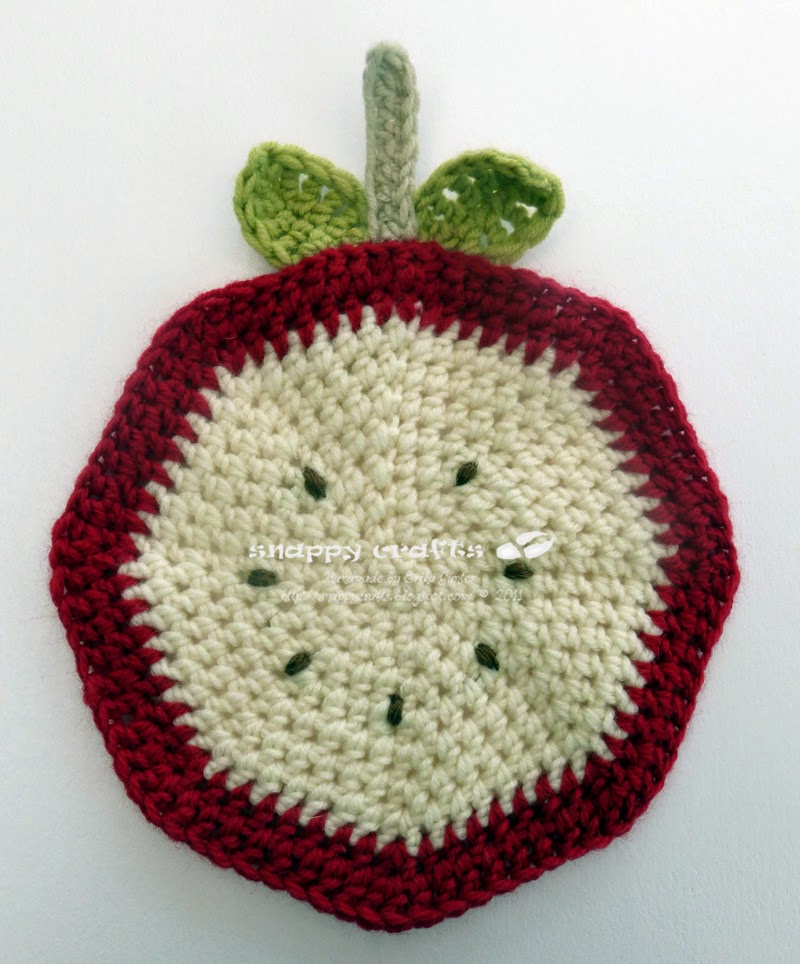 An apple for teacher!
It is a coaster, just in case you were wondering, and I thought it would be nice with a china mug and maybe some tea and biscuits?
I'd rather give them something useful and I've nearly always included an apple for the teacher within the theme.
I changed the original pattern a wee bit as I didn't like how they'd finished off the centre and the seeds.  I know what I like and prefer the LIS approach of the pattern above, just because it's plainer.  I don't really do fussy!
Get me being organised!
I have to be organised this term as unfortunately, nearer the end of term I have a hospital appointment to keep and might be out of action for a wee while.  The joys!

That's all from me today, enjoy your Tuesday.  I'm away now to get the housework I should have done this morning under my belt before it's school dinner time.  Then I have the chimney sweep arriving later and a meeting this evening.  A busy day is planned with no crafting!
Posted by Erika at 12:09

Fabulous crochet work and such a lovely gift for a teacher, fabulously done sweetie, lots of hugs, Marion

Fab idea.Love it! I've started a couple of teacher cards for Louis teachers.I need to think of something for the Headteacher though as she's retiring after 24 years there. xx

Good morning Erika, love your coaster, haven't you come on with your crochet work? Great idea for teachers gift. But watch my blog in a few days if I can get good wifi connection!! And I have a few ideas for you and you crochet hook. Weather still not great here, rain again yesterday evening and a cloudy day, Patricia and I won't be doing June again I think. In saying that the locals have been saying it's been unusual weather this year. Hazel xx