A little golden number but not the norm.

Good afternoon all and how are you today?
The weather is not as good today, still a little chilly but cloudy also.
It was nice to wander along the beach this morning, I was slightly later than normal and got together for a chat with other villagers walking their dogs.  I obviously normal walk in-between peak times, after workers and before retirees.

I've had a bit of a lazy morning today, after tidying the kitchen and walking the dog I watched a couple of programs my hubby had recorded for me saying "this is right up your street!"  It is a program called 13.  It's a bit slow but only watched the first couple in the series, there is something fishy about the story but haven't worked out what yet.  Let's just say, all is not what it seems.

I have also made a card for my eldest sons birthday, 17 tomorrow!   Gulp.
I have a few bits to wrap this afternoon and balloons to blow up later.
When the kids were little went to bed at a reasonable hour I always had plenty of time to decorate the window and add balloons and a banner before birthdays.  I tend not to make as big a fuss now probably because I would dearly love to be in bed before them, and am some nights.  No staying power.

Back to today and I have a Golden Wedding Anniversary to share with you.  I was not asked for the usual Golden Anniversary card but could I instead personalise it with something to do with gardening and a builder. 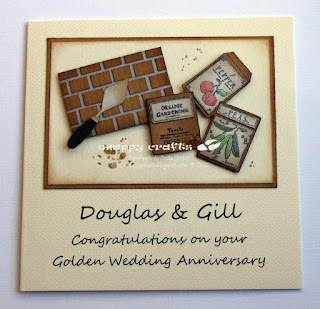 I have made the wall and brick trowel using scraps of card, the packet of seeds are by Docrafts and are paper pieced then coloured with copic markers, everything is aged and brought together using some Vintage photo distress ink.  With a little dirt added for authenticity.
As I said in the title today not your normal Golden Anniversary card.

I'm away now to do a little wrapping and hiding before the boys are home.  Enjoy the rest of your day, more from me tomorrow.

Definitely not your usual anniversary card, but very personal. I love the added dirt! Surely you're not old enough to have a 17 year old! It terrifies me to think that technically I'm old enough to be a granny, just as well I stuck to fluffy bunnies rather than children. Have a great day, Cara x

You did a great job meeting the challenge for the Golden Wedding Anniversary card and it does look fantastic.

I've not heard about the programme you're watching. It sounds intriguing. Good luck with the balloon blowing and Happy Birthday Wishes for your son tomorrow. Barbxx

Hi Erika, like you I'm following 13 and agree that there is so much more to the story, getting hooked though.
Our children grow up so quickly, mine is 45, now that's scary, and no less as he is only 17 years older than me.

Now your card is lovely, and will mean so much to the couple as it's reflecting them so personally.
Take care, Kate x

Greetings Erika, what a lovely card and what fun seed packet and mason tools.