A little break in the proceedings with a floral tribute.

Good afternoon.  Merry Christmas everyone!  Did you survive?
We had a very quiet one with me working up to Christmas and hubby working the next few days we didn't travel to catch up with family but had a nice relaxing time at home.
I finally sat down at 10 p.m. on Christmas eve with everything done and dusted except for the baking I had planned to do, which I shall do this week instead.  I don't think it matters if we make a gingerbread house before or after Christmas, do you?
This was my final job on Christmas eve.... 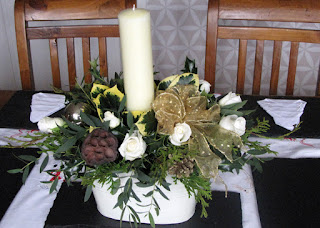 Throwing together a Christmas table decoration whilst supping a wee glass of mulled wine.

The boys got what they wanted for Christmas and soon disappeared upstairs to play leaving me to get one with the dinner.
The dog was the funniest, she tried to get up around 5 and was straight to her presents starting to open them.  She's worse than the kids, they actually managed to wait till 6.30!
You think they'd get later as they get older but mine don't, they've always been early risers.
I got a few crafty bits and baking bits which I am looking forwards to playing with but my main present was a fitbit or as the male members of the house have named it "a fatbit!"
This is because other than cooking, play board games, watch TV and eat I have done very little over the last couple of days.
Today was a day to catch up with some jobs around the house, do some washing, make Christmas soup with the last of the left overs and then head to the cinema.
We had planned to see the new Star Wars film but when we got there it was full.  Instead I managed a quick visit into work to top up on supplies and bagging myself a few lingering bargains (if you know what I mean?!)

As for the rest of the day I think we are planning a film at home instead, popcorn at the ready.
I really should be taking advantage of this time to get in some crafting, I don't know about you, my enthusiasm to craft always takes a head dive after Christmas.
I'm away to try and remove my boys from the electronics for a little family time instead.
Catch you soon.
Posted by Erika at 15:42

Hi Erika, sounds like you had a lovely time, as did we, family meals and company for both days and today has been spent chilling out.
We've all eaten far too much and picked on leftovers that I think I will miss a meal this evening - I've had enough of preparing food.
As for crafting I haven't done any either, the madness leading up to Christmas has sapped all my mojo.
Looking forward to a few more days together before the back to work routine kicks in again.
Lorraine

Sounds like a lovely family time Erika. Your table piece looks wonderful. Been catching up here today too, hoping to get into the craft room this week. Carol x

It sounds as if you had a wonderful Christmas Erika. Your table decoration looks beautiful. Wishing you and your family a very happy 2016. Barbxx