Good evening, a late post from me today after the day at work.  I did actually finish at two but after picking up some shopping, both boys, walked the dog and started the tea, this is the first chance I've had to get on line.
How was your weekend?

I had a crazy busy day at work on Saturday followed by my staff disco, which was fun.  I also won two raffle prizes too!
Something I normally never do.  I did say to put one back in but was told no, take both.  I now am a proud owner of a bottle of one of our new Christmas drinks G&TEA, which has gold leaf in it.  I tried it recently at a tasting session and it was yummy and I don't like gin normally.  I also won a £50 gift voucher for M & S which will pay for some nice Christmas food, mmmm.  Whoop, whoop!
I would have liked to stay longer at the party but we took the boys and had both been at work during the day so everyone was tired.

Sunday I had a quiet morning then I took my youngest out to the cinema with my BFF and her family to watch Nativity 3.  It was a very funny film but I don't think it was as special as the earlier two, I did LOL a lot though.  It was nice to just have some time together.

Moving on to crafting, remember the white tin plant pots that I was asked to make into Christmas decorations for the party?
Here's the end result......sorry the lighting wasn't the best for taking photographs by the time I had them finished. 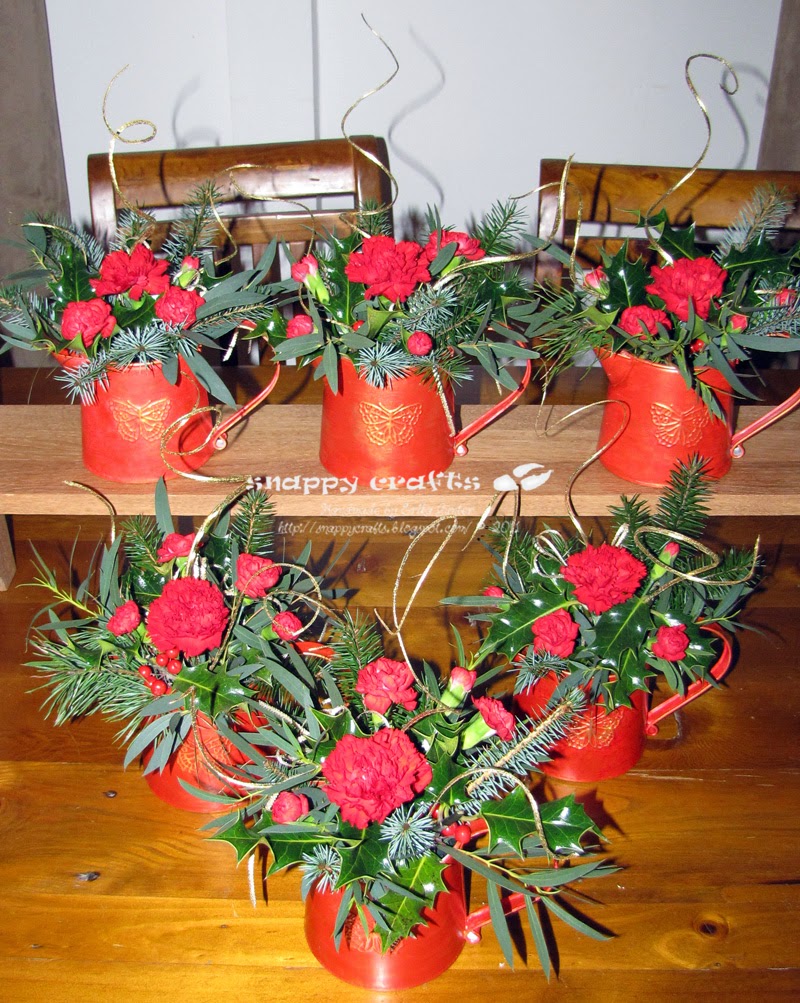 I also rescued a couple of baskets which arrived to work upside down.

So they also went out on the tables.
My boss liked them which was the main point and I had fun making them, plus sore fingers, holly and pine trees can be quite sharp!

Over the next few weeks my postings may start and get a little intermittent as we ramp up for Christmas at work.  I have more hours each week and lots to do at home, the usual and the added Christmas bits and bobs.  I still have cards to make!  Not got onto that yet, that is why I admire those of you who make them all year around.  I always seem to have something else to do first.
Anyway enough of my rambling I better go and see how tea is coming on.

Good evening Erika,,
You made a fantastic job of the decorations as well as the beautiful baskets. You clever, extremely busy girl, I got quite tired just reading your post.
Hugs

Lucky you winning two prizes, the £50 voucher is a good one as you say lots of nice goodies. Love you little watering cans I knew you would come up with something brilliant. See yu hae "prove you are not a robot thing" taking over your blog hazelx

Hi Erika, what beautiful flower displays and plant pots
So pleased you all enjoyed the disco.
I see you too now have word verification, this has turned up in my blog too, I didn't sanction it, this must be blogger being a pain in the a--e yet again, hugs KTE X