Our first visit was to Sea World.

Hi folks, not so warm here as it was yesterday and the early morning walk on the beach was "fresh!"
Still working here on that mountain which seems to be never ending so I'm just doing a bit each day.

My excitement yesterday.....not in a good way, was a wee dead bird in the conservatory, bless....who managed to cover everything in poop before giving up on life.  Such a shame as if I had noticed I would have tried to let it out.  Still I have the joys of tidying that later.

The first place we visited in Florida apart from the hotel was Sea World as we were staying in one of their hotels just around the corner.
Sea World has had a lot of bad press of late with regard to their Killer whales but I have to admit I thought the trainers had a good relationship with all the animals at the park, with a real emphasis put on only working with the animals when they want to.  I'm sure some will disagree and I have yet to watch the documentary "Blackfish" behind all the controversy....maybe that may make me change my mind?
One of the arguments seems to be on the size of the tank in relationship to the ocean....which is a strong point but you could say that about most animals in captivity.

Do folk feel the same about animals which have been rescued from extinction purely by breeding programmes in captivity?
Deep questions for you today folk!
I certainly don't have all the information to be able to make a decision either way. 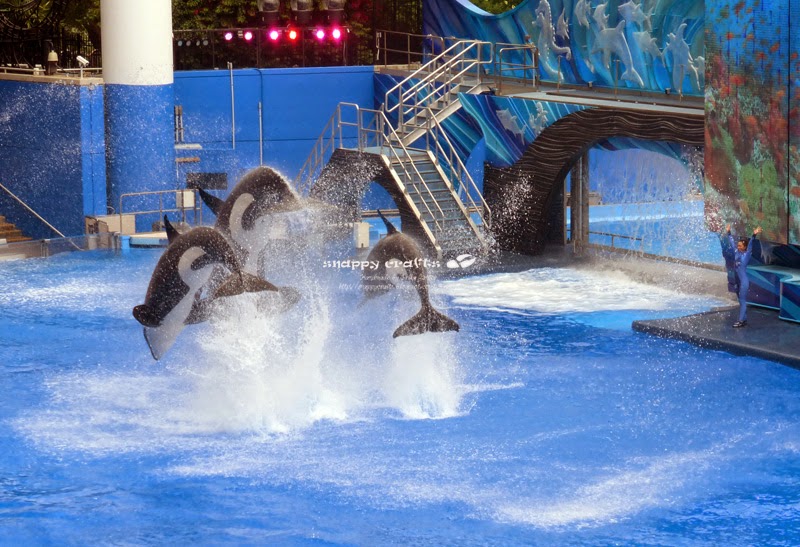 Personally I think the whales are magnificent and very clever creatures, I enjoyed watching and learning all about them.

The kids had other ideas with two big roller coaster rides to do....the first being The Kraken!

I have to admit to having wobbly legs after this one!
Talk about being all shook up.  The boys loved it and went back on again and again.  Sorry the picture quality isn't' the best.  It is probably a good thing.

The second was called The Manta....and once seated actually tips you to simulate the position of a Manta ray.  At first I didn't want to do this one especially after having wobbly legs from The Kraken but I'm glad I did, it was a super roller coaster. 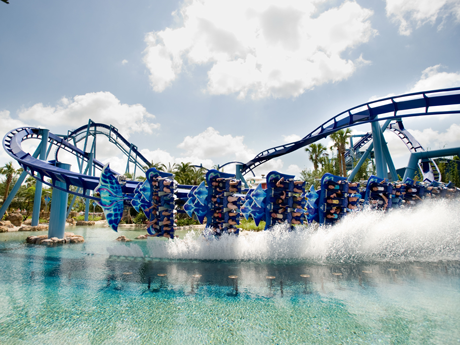 The boys loved it too.

My youngest at the start of the holiday didn't want to do any rides!
I know....we didn't know what to do....no amount of encouragement would sway him, but at some point mid first week that all changed and by the end of the holiday he was a roller coaster demon!
I think it just him a wee while to get into the swing of things out there, the heat, food, drink and all the activities.  By the time we had to head home he really just wanted to stay forever!  Kids.

More from me tomorrow enjoy the rest of your Wednesday.  x
Posted by Erika at 16:26

Hi Erika, good idea just a bit of ironing at a time.
These rides look awsome, wouldn't catch me on them.
Like you I'm not informed enough to have any clear thoughts on animals in captivity, although I'm not keen on zoos, different if animals are nearing extinction then we have to save them I would say, anyway have a good day, hugs Kate x

More great pictures and stories, thank you for sharing them.
Sea World is Thomas favourite place, he loves to go see Shamoo!! Then of course now Lego Land has opened he loves that. He has it all mapped out as to where we need to go visit.
Kept them coming
Hugs

don't think you'd catch me on those roller coasters.I'm a big fearty now.I feel the same as you regarding Seaworld.I don't know enough to judge either way.
Hope you're back crafting
Cass xx

Erika brilliant photos, oh I hate even looking at roller coasters. Aren't kids just so good at not wanting to do things then they change their minds, but we might have been the same when we were that age.
My ironing mountain keeps growing too. You get to the bottom of the basket , then the washing comes in off the line and the basket is full again. Like you I am doing a bit at a time, i.e. A basket a day. Hazel xx