Afternoon all, another later post for me today.
I had a quick dash to Inverness earlier today, spending time out with my hubby and sorting some more Christmas bits and bobs out.
Now we've got some more wallpapering to crack on with in my kitchen.....yes I know it's a stupid time of year to decorate any room, never mind the kitchen!
Whilst I'm beavering away and because I've got my Christmas head on, with shopping earlier and starting the mammoth card making yesterday, I thought I'd share this Christmas layout with you. 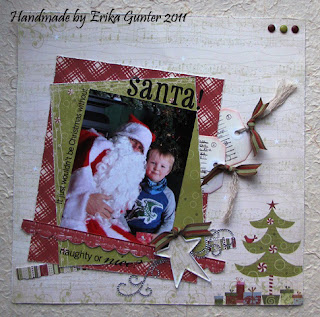 I have used papers from Little Yellow Bicycle Christmas delight range.
The ribbon, bling, tags, rub ons and acrylic star are from my own stash.
The photo was taken at MacKenzie and Cruickshank in Forres...the place to go for beautiful homemade soup and special scones locally, nom, nom!
We visited the garden centre a couple of years ago around Christmas time, we had gone for Christmas soup and a cheese scone, delish.
On the way out we noticed that they had a Santa and our youngest boy asked to see him.
It was great VFM as you got a photograph and a gift plus there was no queue to speak of, but best of all was Santa himself.
He had a lovely chat with my youngest asking him what he wanted for Christmas etc...but as he was finished he called my eldest boy over. (Who as a teenager, doesn't do Santa!)
He told the boys that mum and dad help him with the run up to Christmas so he thought it would be a great idea if the following morning the kids made us breakfast in bed.
Like that would happen!!
Well it did!
I heard my youngest the following morning telling his big brother "remember what Santa said....he might not come if we don't!"
So the wee one made us the biggest bowls of cornflakes with oodles of milk.
(My first job when I got up was to clear up the mess made whilst beavering away in the kitchen, LOL.)
The oldest made us a cup of hot tea....now I know you are questioning why I have said "HOT"?!
Well, on the odd occasion in the past when he has made us a cup of tea, usually when he is after something.....he doesn't always wait for the kettle to finish boiling, apparently it takes far too long when you've got somewhere else you'd rather be!
I had to make a scrapbook page with the story just to remind him for when he is older.  I wish I found more time to scrapbook for my two because it doesn't seem five minutes since they both were babies, but time just seems to fly by.  Every year I say I'm going to try and make the time, maybe next year will be the one to catch up?
As for the rest of my day here, parents evening later tonight, gulp!  The first one for my eldest since he's been in his new school.  It could be interesting.  Then home and maybe a bit more work on my baby bonnet which is looking much better this time around.
Enjoy the rest of your Thursday and I'll be back with more tomorrow.  x
Posted by Erika at 15:20

Great layout, beautiful picture and story I love it.
Know what you mean about not doing the Scrapbooking. I have files of bits and pieces of the boys that need to be done. They will be "teenagers" before I get round to things!!!
Good luck with the Crochet I really need to get started on my Triangle Shawl.
Hugs

A great layout and a lovely story to go with it, it's so sad when children stop believing in Santa.

Hi Erika, love your scrapbook page it's great and such a lovely photo. It's a marvellous story to go with it too. Hugs kate x