LIS with a touch of colour, let's celebrate!

Good morning all and how are you today?
Another April day here, dreich all round but let's hope the weather improves as the day goes on.
As I mentioned in yesterday's post I was spending the afternoon playing, whoops wrong word, creating in my craft room.
I do feel I should be dragging my kids out, albeit kicking and shouting but they're having none of it.
I think we've reached the point where they'd rather play with their friends on line than be seen out with the oldies.  I can understand this with my eldest child as he is 17 but my youngest is not yet 12.
I fear the fact he has a much older brother makes him try to be older than he really is in some ways.
The joys.  I should have had them closer together but hubby was elsewhere at the time, for Queen and country so to speak.

As you know since starting back at work I have been championing the LIS card style, you can get more made in a shorter time scale, although sometimes not if I can't get a design to work as it did in my head.
I haven't played along with the lovely ladies at the "Less is More" blog for such a long time so as I had some holiday time spare I decided to have a go.  This challenge is white space but not white!
I have been making a lot more LIS more but always with a white background so I decided to play around with an idea I had yesterday.  This is what I came up with. 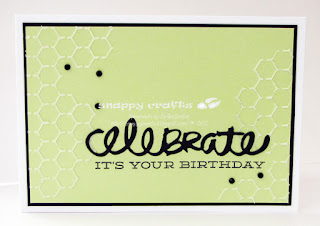 I have used a lime green pearlescent card and added chicken wire left and right with a stencil, by Crafter's workshop, and modelling paste, by DecorArt.  After it had dried I added the die cut sentiment and stamp in black, by Papertrey ink.  Finally adding a few black gems then layering on black then a white card.
I love the texture that the paste gives to the card creating a 3d effect but still flat enough for standard postage.

I'd like to enter this card into the "Less is More" challenge this month and take the opportunity to thank the ladies for a great challenge.  Why not give it ago yourself?
Thanks also to Cara for the heads up, loving her card for this challenge.

That's all from me today, I've got the dreaded food shop to go and do now.  Can't wait!  Not.
I would much rather be crafting, wouldn't you?

I really like your current LIM style Erika. I have real trouble doing it and wish I could.

I love this one. The colour is gorgeous. I was inspired by your card yesterday and spent the morning playing with texture and sparkle pastes. Barbxx

Ooh, I love this, the chicken wire is so cool! I've postponed the food shop til later in the week, hope yours goes ok! Cara x

Love your bold sentiment. Thanks for sharing at Less is More!

Oh just fab Erika, loving the colour and the chicken wire stencil is brilliant. great design. I absolutely hate food shopping, even when Alistair comes along to help, it just all seems a waste of time, I'd much rather live on chocolate, buy a big batch to last me all week. In my dreams, Kate x

This is superb!
I love that die cut sentiment and the whole thing is just fab!
Thanks so much
Chrissie
"Less is More"

Great colour choice - the sentiment really pops against that background! I love the addition of the chicken wire for visual interest. Great card!

Love the design and colour combo of your card. Karen x

Erika, I just love your card especially the green you chose !! I have also become your latest blog follower !

Eye-poppingly CAS, funky and fun!
Love your take on our challenge this week - your design and bold sentiment are a winner. Thanks for playing along and sharing at Less is More this week. Sarah x

Elegant and classy! A really fab card.
So sorry I'm late - still playing catch-up from my holiday! Thank you for joining us at Less is More.
Sharon xx