It's Saturday, time to tickle that creative funny bone!

Good morning, how are you this weekend?
My pal and I, with kids had good fun last night with the car treasure hunt and disco.  We certainly got a few funny looks along the way too!  I'll show you why later in the post.
Firstly time to share a few creative funnies, which has become a bit of a habit here on a Saturday morning.  Today we have a sewing and crocheting feel to the quotes.
The first one made me laugh, but you need to play along by saying it in a Spanish accent. 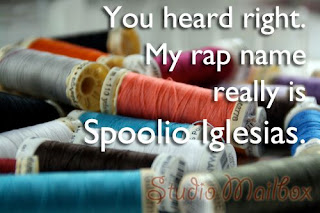 You did a Spanish accent didn't you?

I don't know about you but if the said gentleman below approached me and asked me about my crocheting I might just be rendered speechless!  Maybe it would be the one occasion that I wouldn't return the question by counting loudly as I continue to crochet?!
Did I mention that "NICE" distractions are allowed?
Wishful thinking girls, don't you agree? 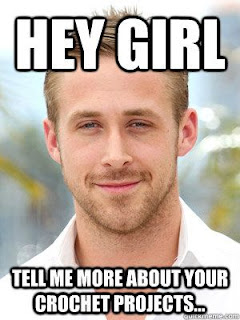 The reason why the above quote made me smile is a conversation I had with my hubby earlier this week about the Gala craft show today.  Sometimes I enter sometimes I don't, for reasons I don't want to discuss on line.  Oh now I've got you thinking!

Anyway, moving on, hubby asked why I wasn't entering a crochet project to which my response was, there isn't a category.
There are four knitting categories to which he said, isn't it the same thing?
Now as a crafter I took a gasp of air and started laughing.
You and I both know that it's like telling him the cricket is on TV and then putting on the tennis, but he couldn't see the difference.  He ended up regretting it as I decided to advise him on the differences, to which his response was, but you use the same wool!
Arh!
The differences between men and women, I would probably be equally as baffled by a car engine.

Last of the quotes today, do you arrange your yarn like this!
I have to say mine are in bags which isn't very exciting but it is more due to lack of space than anything else. 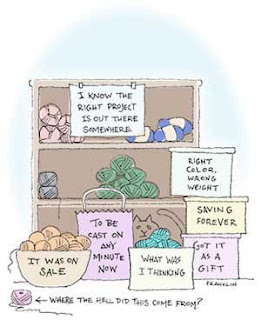 I love the one at the bottom, I have a couple of balls like that which I know I haven't bought but are still in my stash.  How does that happen?

Finally today a couple of you asked to see photos of our fancy dress last night, we had such a laugh, basically because of what we dressed up as.
People certainly treat you very differently!

I'm behind the driving wheel, unfortunately the picture isn't the best with the tree blocking the light but you get the general idea.  We had a big white cross on the bonnet too.  Then at the back.....

The amount of people who had a second luck as we drove round and the comments we got. LOL.
It was really funny.  Some girls on route were messing about and at that point I was on my own as my pal and the kids had hopped out to get clues only to hear the cries, "My god there's a nun over there, she must be doing it too!"
It is also amazing how many drivers let you out of junctions.
My hubby was asked this morning, was your wife dressed up at a nun last night?
To which he said, yes.
He then got the response, phew, I shot in the house as I thought they were doing the rounds asking for donations!
We also got served quickly at the bar too, another bonus.
We didn't win but we did have lots of fun along the way, as we rolled back to the finish line what was playing on the radio but Sam Smith's Take me to Church!  Spooky or what?

It only remains for me to wish you all the very best over the weekend.  Have a good one.  x
Posted by Erika at 10:48

Hi Erika,
wonderful post today.
I definitely would be struck dumb if that young man asked me about crocheting or anything else. LOL.
Have you got Netflix, as there is a Netflix original series on there called Grace & Frankie.
On one of the episodes her ex hubby buys a chair with the said young mans face on the seat.
She takes it and says if anyone is going to use this it's me, but obviously she puts it in an other way, but I can't repeat that on the blog can I.
Your photos of your outfits were really good, and I can well imagine all the fun.
Have a wonderful weekend.
Lots of crafty love. Jenny L.

Your Saturday posts are always fun to read but this one is the best by far I think. Lovely pictures and a great story, sounds like a good time was had by all. I think it's great to live in a community that gets together and enjoys these kinds of events and involve all the family - a lot had been lost by large cities and towns.
Hope you have an enjoyable weekend
Lorraine

Another fun post Erika...love your treasure hunt get up! Hope the rest of the weekend is as much fun. Carol x