So ladies did you get spoilt this morning?  No?!
Neither did I.
Mine you I did find this quote I used on a card last year and it pretty much sums today up.......

So there you go, LOL.  Romance is dead!  Mind you I do have to admit I have noticed the decline over the last 10 years in general.  When I first started making cards I did a roaring trade at this time of year with gushy cards, rude cards and simply romantic cards...  But I have noticed the decline in sales too.  At the end of the day who needs a day to be told be romantic when you can do something everyday?
Not that that happens either....but I tend to find it's the little things I appreciate now.....like that first cup of tea being brought to you in the morning, a couple of hours peace when the kids are dragged out on a bike ride, a bottle of brandy!  Hick!

Anyway yesterday I mentioned that tonight I am doing a craft class with a group of Beavers....and to those of you who think little brown creatures...I'm afraid you are mistaken, although wouldn't that be an interesting concept?!
Beavers as in Scouting.....younger than Cubs and Scouts.
That being the case we are doing something for Valentine's day but I am keeping it simple. 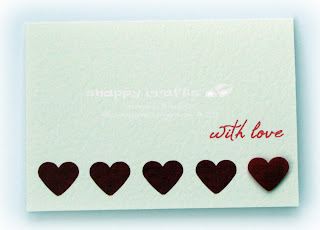 Simple heart punches and sentiment from Marion Emberson Design "It's all in the words" from PI.

which may be a wee bit fouterie for them but we will only see tonight.
It is all cut out ready so we have all the time in the world to put it together....well about 1/2 an hour! 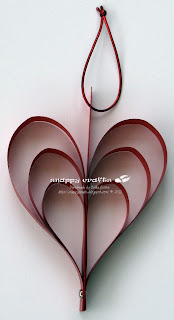 I have just used different length of red paper and card and a brad....simples!

That's all from me today...I'm off to carry on with more work on this Wedding and then I've got Herman to bake later....more about that tomorrow.