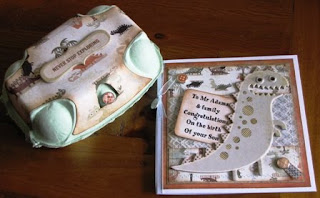 So I promised a post for today and here it is.  This is the card I sent recently to one of my eldest boys new teachers who is celebrating the birth of his first baby....it's a boy!  (Did you guess, lol)
I have used papers from the Basic Grey range Archaic and the chipboard shapes and brads.  I have added a bit of stitching...google eyes...a small tag from SU marked "baby" a bit of ribbon and a charm marked "love".  Oh and where would we be without a greeting from the 'puter?!
The egg box I wanted to keep as simple as possible and basically took the paper from the supermarket off and used as a template to cut the BG, to which I added a brad and chipboard.  Everything has been inked with Vintage photo distress ink from the Ranger pads.
I also bought a little hoody with dinosaurs on and a first book of Dinosaurs to match!
Inside the egg box I added 2 pair of first size socks and scratch mits plus bigger dino socks to go with the hoody, see below:

I saw a similar idea in an American magazine for a baby shower, which we don't tend to do over here but thought it was something a bit different.  One of my pals saw it and has delivered me 3 egg boxes in the playground this morning so I think it could be a hit?!:)
Did anyone notice I did follow the sketch over on The Sugarbowl blog but as I wanted to use the Basic Grey range of stash it doesn't come under the entry requirements for the draw...thanks for the challenge anyway guys, it made for a quick and easy card!
Posted by Erika at 12:02

Erika...I LOVE this!!! What a fab idea. It is now filed away for future reference when I need a quick baby gift! Gorgeous card too. Love this Bg range of papers,
Hugs Judy xx

What a briliant idea - just need to find a friend who is having a baby now!!

Hey...what a fabby idea...may give that a go myself...wonder if anyone would buy it on the etsy shop!!!

What a fasntastic idea! Made me say "now why couldn't I have thought of that!"
Can't wait for my sister and my friend Sarah to have their babies now LOL

Love it! It's ace and my fav papers too.