So this weekend just gone the girls from Fraserburgh came through to Elgin to crop at Mayne house...Jo, Sarah and I joined them.  A great time was had by all.  The food was plentiful with lovely homemade soups, homebakes and puddings, yummy yum yum.  Conversation and crafting was flowing...some more than others, I prefer to craft slowly letting the creative juices flow, lol, Jo who I sat next to was on a roll and I think she said she completed 9 LO's, that's more than I get done in a year!  I hope to rectify it this year.
:-)
On Saturday night we had a lovely chinese meal made better by all sharing so we got lots of little tastes of things normally we wouldn't order, I love doing that.  After the meal we retired to the living room to play games....the embellishment game, bingo, match the paper with the designer and anagrams (which I am the pits at!)  It was a good giggle and here are a couple of pics from the evening. 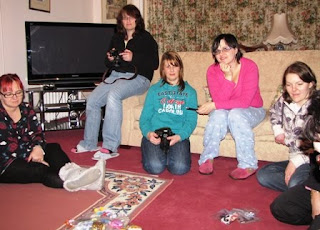 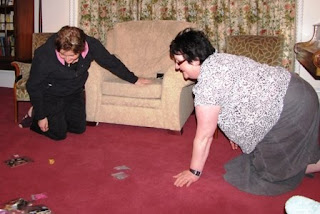 The top picture has Jo posed to take a picture whilst we watch on the embellishment game...the second is the grand final with Angela winning having come runner up last year!
You can see some other pictures of our weekend on Jo's blog, the house we stayed in plus one of me cake decorating.....Jo I'll get you for that later, lol! 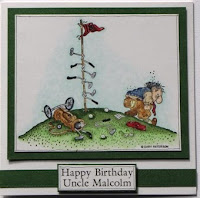 This was the first of my cards that I made this weekend.  It was like going back in time as this is how I first started with card making, stamping an image and colouring, very relaxing, well I think so!
The stamp is from Stamps Happen and is called "It's only a game!"
I coloured the image in with my copic's and kept the rest of the card very simple so it's just the stamp that stands out.
My uncle loves his Golf so I hope he likes this too.
Posted by Erika at 18:41

Looks like a good time was had by all Erica - next time hopefully!!!

Fab pics and write up Erika. I can't believe it's all over for another year !