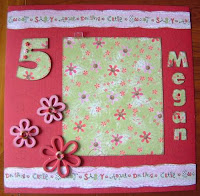 Today I have mostly been doing housework.......NOT!

Karen set a new trend when it was my second son's birthday and gave me a LO for a picture rather than a card. I was so tickled pink with this idea I decided to return the favour this week for her daughter's birthday. I really enjoyed getting my hands on something pink. Such a lovely idea as it get slipped into an album rather than hidden in a draw or even worse thrown out!
Posted by Erika at 19:36