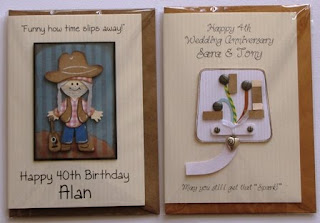 So guys this week I've had a couple of requests for bespoke cards....the first;
and my brief was "the only thing I can think of is he likes "Willie Nelson"...to which I said who?!
Now I know...
I could have taken the easy route and used a picture of Willie but I like a challenge so decided to use my cricuit paper dolls and experiment...I hope he likes cause that wee chap took a wee while to do, lol.
The second;
and my brief was a 4th Wedding Anniversary with a difference.
Now the traditional gift for a 4th Anniversary is Linen, however the modern version is an Electrical item.
BINGO BY JINGO
.....the guy is a "sparky" so I couldn't not produce my version of re-wiring a plug
with a comment about still having that "spark"
and inside a reference to hoping their anniversary is "electrifying",
I hope they get my sense of humour!
Posted by Erika at 14:37

Such a sweet card - love my sizzix people - will have to stock up on blush blossom as it is the best flesh tone I have found!

Aaaw look at those cards - I am so rubbish at coming up with ideas...xox

Fab cards. The electric one is really clever!