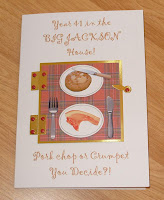 Over the years I've had a few strange requests for cards and this one is no exception. The request was for a pork chop and crumpet to feature on the card and a little tartan as it was going south. The card doubling up for a birthday and wedding anniversary as both on the same day, which explains the brackets, as under the table is a birthday greeting one side and a wedding anniversary the other. This also follows inside the card with a verse either side for each occasion. My customer was "well" pleased with the card and has said there will be lots of explaining to do when the recipient gets it!!! Mind boggles!

That just mad me giggle.